TDEM (or TEM) is the best technology for mapping variations in subsurface conductivity useful in identifying massive sulfides, graphite, and kimberlite pipes, as well as for mapping changes in conductivity/resistivity for mapping geology, alteration, silicification, and ground water. TDEM measures the electrical conductivity of the ground below the sensor by inducing a current into the ground. The transmitted TDEM field induces a series of currents in the earth at increasing depths over time. These currents, in turn, create magnetic fields which can be measured to map subsurface conductive properties. Because measurements are made while the transmitter current is turned off, the more sensitive measurement of the magnetic field generated by the subsurface enhances resolution of conductive features at great depth. 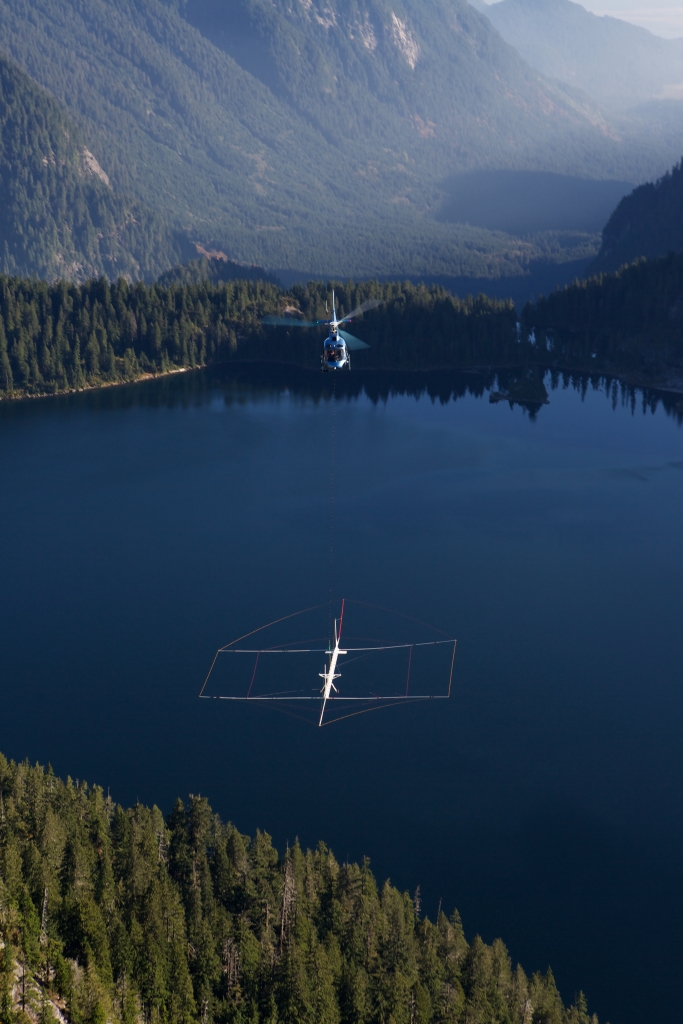 1TEM is a fully automated system operated from a helicopter platform which provides lower operating cost with a high level of safety.    Its simple lightweight design, low polar moment of inertia, and stable low drag aerodynamics in horizontal, climbing, and descending flight regimes make it well suited to operations in mountainous terrain without compromising power or resolution.  This allows it to collect better data, especially in steep terrain, through longer survey endurance and close terrain draping while reducing costs. 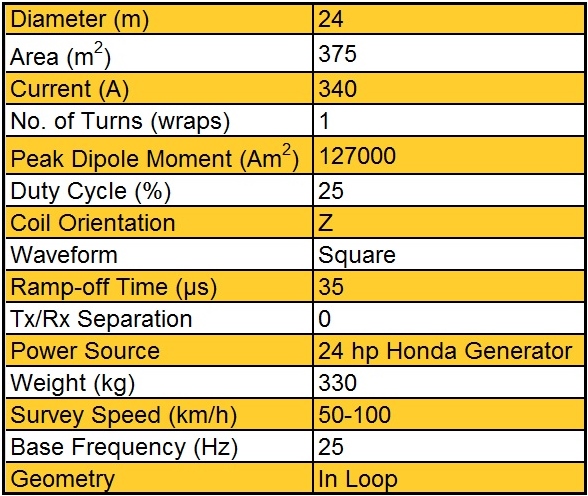 Frequency domain EM is best used to map near surface geophysical features that may be desired for mineral exploration, structural mapping, and groundwater studies. For example, gravel deposits and kimberlite bodies are sometimes only detectable using frequency domain EM technologies.

ATLAS is an innovative, fully digital, third generation FDEM system. ATLAS's exeptionally high signal/noise ratio makes it capable of measuring subtle differences in resistivity and conductivity.  It uses a unique single set of transmitter and receiver coils and up to five user-programmable frequencies. ATLAS is operated from a helicopter platform and its simple lightweight design and stable low drag aerodynamics in horizontal, climbing, and descending flight regimes make it well suited to operate in mountainous terrain without compromising power or resolution.

The multichannel RMS Herz TOTEM-2A VLF-EM system receives the electromagnetic component of fields radiated from remote or local VLF transmitters in the 15 to 25 kHz frequency range. This is a state-of-the-art passive EM system with a built-in sferics filter and selectable frequencies. Components normally measured are the change in total field, the vertical quadrature component, and the total field. As this system can process two frequencies from two spatially separated transmitters simultaneously, gradient measurements are possible. The receiver is totally passive and is ideal for conductivity measurements in the near-surface environment.

Combined with high resolution aeromagnetics and radiometrics, VLF-EM data are highly effective for the interpretation of large scale geological features such as faults and conductive rock units, and more discrete conductors such as groundwater and massive sulfide deposits. The VLF-EM system is part of Precision's fully integrated multi-sensor mag-spec-VLF system, designed so that none of the individual data sets are compromised.